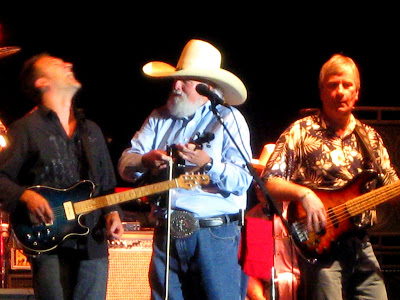 I just realized that I've got a few pics in my camera from the Summer that I can share with you. If you are a regular reader of this blog then you know how much I love Billy Ray Cyrus. Not only is he a wonderful musician and talent, but he is a genuinely nice person who 'gives back' which I love. He has always supported our troops and I was so excited when our kids gave us tickets to the Freedom Concert in Jackson, NJ because he was on that tour along with The Charlie Daniels Band, who we also love. The Mister and I have seen the CDB a few times before and they never disappoint. Always fun. I've never seen Michael W. Smith before and he was wonderful as well. Lots of talented musicians and interesting people at this show. The best part of it is that all of the money raised goes to the Freedom Alliance which provides scholarships for children of our troops who have been killed or seriously wounded in their service to our country. The show we went to at Six Flags had about an hour delay due to some equipment failure or something, so when it was Billy Ray's time to perform, the fireworks in the park had just begun and were incredibly loud and close. Inspired by the 'rockets red glare,' Billy Ray handled the situation with grace and started to sing The Star Spangled Banner which of course had the entire crowd on their feet. It was lovely. John and I stayed at the Holiday Inn Crowne Plaza overnight (the upside of earning all those points when going to dog shows...) and we had a really nice time. -CS ^..^
Posted by Cathy Santarsiero, "The Christmas Corgi" at 1:51 PM

That sounded like fun! I've never seen Billy Ray or Charlie Daniels in person but I have seen Michael W. Smith. He is from Kenova, West Virginia not to far from where I live. Charlie Daniels was here in September but I didn't go.

Hi Cat,
I agree with ya' that CDB never disappoints.
Sounds like you got to hear some good music over the summer. Soon, it'll be time for Christmas Carols...where, has this year gone?
Hope all is well~

I think Billy Ray is a good dad too.