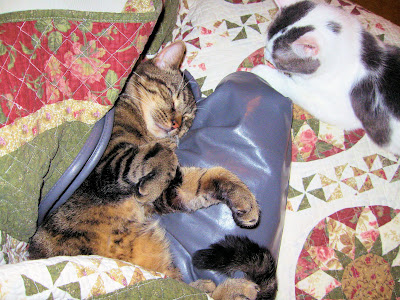 My friend Stephanie came over last weekend and no sooner did she put down her bag then Skittles and Weebles decided it was the place to take a cat nap. Steph and I are actually related by catness. Our sons had rescued two kittens whose mother was hit by a car. She took one (Punky) and I took the other. Goku is ours, the big black cat (not in this photo) who looks like an eggplant from the back when he is sitting.

What a week it has been! My great aunt passed away. It is sad to see all of the old ones in the family say goodbye. The funeral was on Saturday which happened to be my birthday. It was good to see my cousins. Why is it that we don't realize how much you miss someone until you see them?

Later in the day, we did come home to have a little party complete with ice cream cake. My parents gave me the absolute coolest chandelier (it is wildly colorful) for my little studio. I promise I'll show it to you as soon as it is hung up.

Sunday, Mary Elizabeth and I left the house at the crack of dawn to bring a Corgi to Maryland who will be headed to Indiana by way of North Carolina. The weather was wicked. I expected to see Miss Gulch on her bike fly by. There was flooding on the roads and we arrived just in time to have a tornado warning on the radio telling us to get into a basement or under something. Yikes. When that passed, we headed home.I had my muck boots on, but Mary had to take off her socks and shoes to get through the water back into the van. We felt like we were on a log flume ride most of the time because of the way the van went through the water on the road. Then we hit the traffic from people coming home from the Jersey shore. Lots of cars pulled over on the sides of the road, lots of families and kids at the rest stops. At one of the rest stops, Mary Elizabeth opened up her cooler in the back of the van. She brought us a veritable feast! We had a picnic in the car with the rain pounding down. I think she practically brought the entire contents of her fridge with her. We made really good wraps in the car. Mine was fresh mozzarella, tomato, fresh basil, avocado and a spritz of vinaigrette. She even made fruit salad for us in two giant covered Pyrex bowls which we munched on in traffic.

My Brother, Sister-In-Law and niece flew in from Los Angeles too. I even got to spend some time with them on Sunday after the wild ride. My niece is getting so big, she is such a cutie pie, crawling all over the place.

So that was my weekend, my lovelies. How did you spend yours? xo xo ^..^

Posted by Cathy Santarsiero, "The Christmas Corgi" at 10:23 AM

happy belated birthday!! will be excited to see the chandelier when it is "properly" hung in its rightful place.

I loved reading how the corgi was going to be finding its new home; that was quite an adventure to go from you to Maryland to Indiana by way of North Carolina! that will be one tired corgi I'm sure! what a storm you guys endured too; so thankful for your safety and the resourcefulness of your friend to be prepared with all that delicious food

sorry about the passing of your great aunt; I'm glad though that you were able to see some cousins and reconnect with them

I'm sorry about your great aunt.

I too have a big black cat that resembles an eggplant from the back. The corgis love him. He hates the corgis.

We drove through torrential rains Sunday afternoon on our way home from a drive to Connecticut to pick up a new drum carder. Nasty stormy stuff! Sounds like you had a much better meal though, I should have thought of that!

First of all Happy Birthday.

Secondly sorry about the passing of your great aunt.

Enjoyed your weekend story and about relocating a Corgi to a new home.

Hi everyone...I must clarify that the Corgi was brought for a 'honeymoon' with a lovely stud dog. She will be coming back home to us, and hopefully not alone. xo xo Cat ^..^

Congrats to Stella for her award of employee of the month!-well-deserved.

So sorry about your great aunt-it is sad to see our relatives pass...

You've had some busy days, with some sadness thrown in.
Where in Indiana were you? We're near Ft. Wayne, up north. Hope your birthday was a happy one, and can't wait to see pics of the enhanced, chandeliered studio!

I can't wait to see your chandelier!