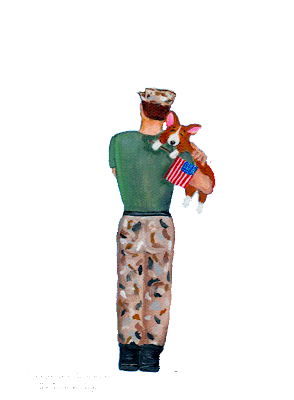 A Soldier's Burial
by General George S. Patton
Not midst the chanting of the Requiem Hymn,
Nor with the solemn ritual of prayer,
Neath misty shadows from the oriel glass,
And dreamy perfume of the incensed air
Was he interred;
But the subtle stillness after fight,
And the half light between the night and the day,
We dragged his body all besmeared with mud,
And dropped if, clod-like, back into the clay.
Yet who shall say that he was not content,
Or missed the prayers, or drone of chanting choir,
He who had heard all day the Battle Hymn
Sung on all sides by a thousand throats of fire.
What painted glass can lovelier shadows cast
Than those the evening skies shall ever shed,
While, mingled with their light, Red Battle's Sun
Completes in magic colors o'er our dead
The flag for which they died.

My grandparents always called Memorial Day "Decoration Day." In trying to find out some of the history of the origins of this day I have read that there are over a dozen towns in the USA that lay claim to be the first to honor those who have given their lives in service to our country. Decoration Day was so named because the graves of our fallen war heroes were decorated on this day. Today we also remember all of those who have died in service to our country, not only on the battlefield but in our own towns and cities, our firefighters and police officers. Here in New York, it seems that everyone knows someone whose lives were forever changed on 9/11/2001. Time may ease the pain but will never erase the memory. We will never forget those who died trying to save the thousands who died in the towers. Heroes who ran in when others ran out.

Yesterday I watched this movie again. It was on HBO. I know it is on HBO on Demand again this month. I encourage you to watch it if you can. You can probably rent it if you don't have HBO. It is so well done and on this Memorial Day it is a good reminder of the sacrifices so many have made for us all. It is a good reminder that so many brave men and women serve and protect us now. May God bless them all. ♥ CS
Posted by Cathy Santarsiero, "The Christmas Corgi" at 9:19 PM

Cathy, I love your drawing. Thank you for helping us to remember what today is really about.
xo, Cheryl