We've been giving my little studio a much needed paint job these past few days. Late yesterday afternoon the Mister, myself and our daughter stopped to have dinner. We watched some of the Lord of the Rings marathon and had really yummy salads and ice cream sundaes. After cleaning up a bit, I flipped through the channels to see if I could find out how much snow we might actually be getting. Did I mention it is snowing? Well, it is. We've got at least 6 or 7 inches out there so far. Anyway, while flipping the channels I was compelled to stop on HBO to watch the most wonderful movie starring Kevin Bacon. I didn't plan to, I was planning to go to bed 'early.' I'm so glad I watched this film. 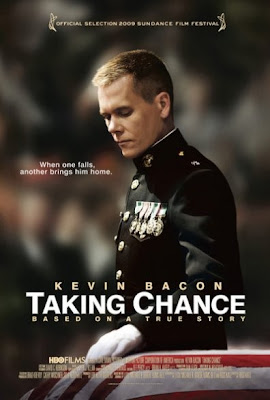 It is the true story of Lieutenant Colonel Michael Strobl, USMC who had requested that he be assigned for military escort duty to accompany to his family the remains of 19 year old fallen Marine Lance Corporal Chance Phelps. From HBO's website: "His first-person account, which began as an official trip report, gives an insight into the military's policy of providing a uniformed escort for all casualties. The story became an Internet phenomenon when it was widely circulated throughout the military community and eventually reached the mainstream media. 'Taking Chance' chronicles one of the silent, virtually unseen journeys that takes place every day across the country, bearing witness to the fallen and all those who, literally and figuratively, carry them home. A uniquely non-political film about the war in Iraq, the film pays tribute to all of the men and women who have given their lives in military service as well as their families." 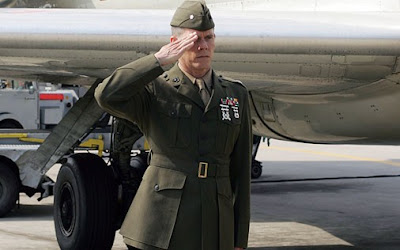 You can find the HBO trailer here, along with the airing schedule. If you are snowed in today as I am I highly recommend making a pot of tea and watching this film on HBO on demand.
Keep a box of Puffs handy.
Well done, Mr. Bacon. Well done. -CS ^..^
Posted by Cathy Santarsiero, "The Christmas Corgi" at 9:45 AM

Looks like you are getting all of the snow that they were predicting that we would possibly get. I even went to the store to make sure we wouldn't run out of milk for my cereal eating 4 yr old boy. lol Right now it is a very cold 21 degrees outside. Brrrr! I'm so sick of this cold weather!
Looks like Old Man Winter doesn't want to give up his Rule!
Stay warm!
Angela

I heard that movie was good! thanks for confirming it Cathy!! glad you got a bit of snow; bet the corgis loved it!!

So glad WE'RE not getting that stuff! Actually, we received several inches on Sat., but it is melting like crazy and by Thurs.--hold on to your socks--we're gonna hit the 70 degree mark! Yippee--I feel Spring around the corner! :)

So glad to get such a great review on the movie! I hope I can see it some day--I have always loved Kevin B.

When do we get to see your newly painted studio? Great photo of you in your sidebar, by the way.

Oh, I had no idea that this movie was available on HBO, thank you for letting me know. My son should see this, so we will watch it, hope it is available "on demand".

Also, it's very cold in Florida right now, I think the entire country needs a warm up!

I watched it myself late at night when the sleep wasn't coming-it was truly a great movie!