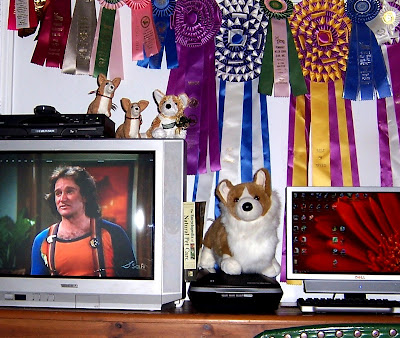 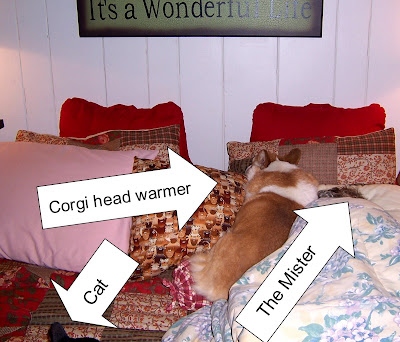 I hope you all had a nice Thanksgiving yesterday! Whoa...does that huge turkey dinner make you sleepy or what? John had the day off today. Sometimes the best intentions of things we want to accomplish get pushed to the side by the call of the bed and the TV clicker.

Two hours later, I woke up covered in wee beasties. Most get up when one of us leaves the bed, but there's always a die hard who waits for the last person to get up.


As I watched some of those TV commercials for stores that opened as early as 4:AM today for early shoppers, I think that there would be a snowball's chance in hell of me getting up to shop that early. (wake up like a crazy person to go to a dog show at 4:AM and, oh yeah, I'm right there, but shopping, fuggedaboutit....) Maybe after a grande Starbucks. Maybe. I feel really bad for the sales people who had to be at work that early today. I am glad today 'officially' starts the Christmas holiday though. I do love the whole Advent and Christmas season and everything about it and I tend to start celebrating a bit earlier than most. Did you watch any of the Macy's Thanksgiving Day Parade? I'm sure all of the Hannah Montana fans were watching for Miley Cyrus on her Bolt float. I'm not sure which float was my favorite, there were so many really cute ones. I did really like Idina Menzel's float (and her song!) it had the M & M's dressed as Broadway characters. The green M & M dressed as Elphaba in Wicked was really cute. OH! And the new Smurf balloon! How Smurfy is that? So cute. I really liked the Sesame Street float, and the one with Kermit the Frog, too. And the Rockettes, you've got to love them. I marvel at how they are never out of sync. Incredible. Of course, anyone from New York (or anyone who loves Miracle on 34th Street) knows that as soon as Santa comes by at the end of the parade, the Christmas season has officially begun. At least now since it is 'official,' I don't have to hide my Christmas CD's that are in my car. I can eat my Pepperidge Farm gingerbread cookies and pfeffernusse cookies in public and with reckless abandon, and I don't need to think of an excuse as to why Prancer or The Grinch or Rudolph or Christmas in Connecticut or any other Christmas movie is on my DVD player when someone pops in. Huzzah! Fa-la-la-la-la-la-la-la-la! Ding Dong Merrily On High! Let the season begin! 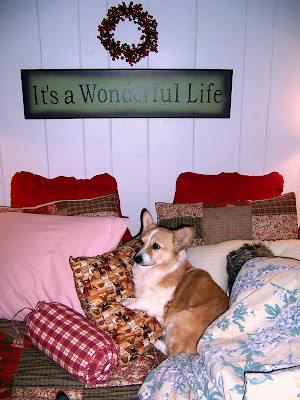 Posted by Cathy Santarsiero, "The Christmas Corgi" at 9:11 PM

I loved the last picture with the corgi on the bed; such a fitting place for them, isn't it? (ours is a bed hog)

seems like you had a nice day and enjoyable time :)

I'm with you; not a shopper to get up that early to go out

Both of my girls are champion nappers and love it when we take naps. I have many, many fabulous pics of napping with the girls. I think that's one of my prime joys in life.

There is absolutely nothing better than an afternoon nap with a corgi!

BOL, Izzie kinda sleeps that way too... although sometimes she makes a nice russian type fur hat by crawling ontop of your pillow and curling up around you head, BOL!!!

Mork and Mindy, how can anyone resist?!

Your corgis are sooo sweet and cute! They remind me of my girl :)

I just love coming here and seeing all of the corgi love. It just makes me smile :)

Enjoyed your blog - we share my bed with 2 with 2 amazing dogs: Miss Ace - a 14 year old beautiful black Lab mix and Zip, an energetic blue heeler, who is always looking for someone to herd or boss!

Maybe you are familiar with this website - newsletter just for animal lovers: http://www.animaltalknaturally.com/2008/11/29/atns-natural-pet-newsletter-december-2008/

Enjoy - I'll check out more on your blog later.

Ha ha, I'm a closet X'mas song listener year-round as well! Hubby just rolls his eyes when I got "caught" playing X'mas music in October :P I like your head warmer, btw, we have a footwarmer :)

Our king bed is always full of corgi hair, because they sleep with us. Sigh....I love 'em...but they are an awfully hairy breed!
Who can say no to one of those guys? Those darn brown eyes are killers!

I loved that post!!!
I went out ONCE on the day after TGiving and mixed with the mall crowd--and I have NEVER done it again. Just like you said (about dog shows) my eyes will pop open at some wee hour in the morning if I know theirs a great flea market, antique sale or craft show near by!!!
I love Christmas, too, and I pulled our my CD before TGiving--I love em so much!
Our bed can get crowded like that, too! Dana (no Corgi's -- just kitties).

I just discovered your blog and I'm enjoying it!