It is raining Cats and Corgis outside...

Good morning my lovelies. I'm back from a weekend of dog shows, the Thanksgiving cluster in W. Springfield, MA held at the Big E. It is usually held the day after Thanksgiving, but for some reason it was the week before which is fine with me. It was less hectic than trying to get it together right after the holiday. Well, it should have been. Mary Elizabeth and I tried to leave 'early' on Thursday, but she had electric problems and I had plumbing problems so we left just in time to hit rush hour. Neither of us had breakfast or lunch. Half-way there we realized how hungry we were but didn't want to stop till we got there. Luckily I had two candy canes in my tack box which we dubbed 'hors d'oeurves.' What a cold weekend in Massachusetts! Saturday night was Mayflower Corgi Club's Christmas dinner and meeting. Dinner was held at the very nice historic Storrowton Tavern and Carriage House. It was so cold that we went in the first door we saw nearest the parking area. We found a few friends who had done the same and were warming themselves by the fire. This warm coziness was short-lived however because we soon realized we were in the wrong building and had to go outside to get to the right one. 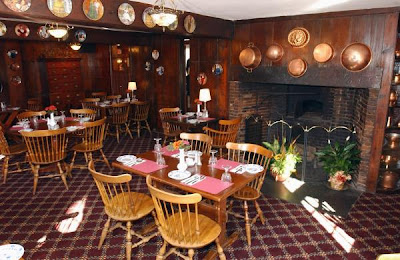 The nice thing about having our meeting at Storrowton is that it is right on the grounds of the Exhibition center and if anyone is still running in agility, they can hop right over to the restaurant when they are through. Mary Elizabeth had Feisty, her Border Collie entered and also had to stay in the agility building for a meeting of the newly formed Nutmeg Border Collie Club. I brought some stitching with me to do while they blathered on. None of our dogs did too well this weekend. Knocked bars, missed weaves, 1st, 2nd and 3rd placements in conformation (no points) but it was still fun to see friends before the holidays. When I got home, the Mister was cooking dinner and the house was clean (thank you, kids!) Today it is pouring rain. I think I will bake something and start looking for our Christmas decorations. What are you up to today? -CS ^..^
Posted by Cathy Santarsiero, "The Christmas Corgi" at 9:00 AM

Just made my first over the border trip to the bakery, grocery store and duty free liquor store. Wow, it's such a difference in the store for groceries, interesting packaging and definitely different foods. I like it!

I'm ready to decorate for Christmas, too, but right now I'm at work, so it will have to wait until this weekend.

Glad you had a great time at the dog show.

I'm glad you had a good time, gosh it sounded chilly. The snow has come and gone here over the weekend. Pop over to my blog to join in a launch party and giveaway :) Catherine x

I just love that name of the Mayflower Corgis Club; I can just imagine corgis on the Mayflower; what an adventure that would have been! sounds like an okay trip if you got to come home to a clean house!!

It's not quite that cold here on the other coast, but rain is coming our way too. I don't know why but I don't feel that it's "officially" the holiday until after Thanksgiving- that's when my husband would "allow" me to listen to holiday music all day and go tree shopping :P

Driving through rainy Los Angeles.... not too fun. Though nice when we got to our destination!

Hope you have a fabulous Thanksgiving!

Oh, sitting by fires and stitching seems so inviting. It is "cold" here in the south ....we lack your New England hardiness!
Rose has Mr. Putter in training now with the hopes to go on to agility training. We are very fortunate to have a dog training school just a hop, skip, and a jump down the road. The instructor informs us Mr. Putter would do well in obedience or agility competition. Please pass on any helps you have found before you took this path..... I know I have said it before, but just to reintegrate, my girls love your site!

Your weekend getaway with your poochie and friends sounds so wonderful---cool weather, with fires and stitching...not much is better than that!
I just crashed after a day of cleaning and cooking---the TGiving feast is underway at last! I will rise early in the morning to bake the bird and finish pulling the house and the rest of the food together!
I hope you have a wonderful Holiday, Cat! I am thankful I found you and your blog this year--you are such a talent and so much fun to visit! Dana

I'm so jealous! I grew up in West Springfield (good ol' West Side) and did The Big E and Storrowton Tavern and Theatre many times. If you took more pics, would love to see them (and live my life vicariously through your travel).

wow, that tavern is just so cozy looking.. and it screams new england! making me crave a hot cider right about now.