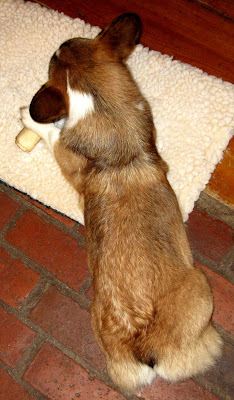 You know those days. We all have them. Those days when you should have stayed in bed if only the Corgis would let you? I'm talking about the days when the best laid plans of mice and men just go by the wayside...those days. This morning I picked up my mom and had plans of doing tons of creative things. No sooner did we arrive at home when the power went out. Again. Sigh. I called the power company and they said that about 1500 homes in the area were without power. In order to get any type of cell phone service I have to drive about 4 miles up the road. You know 'the spot' instantly because lots of cars have pulled over there. 3:00 ish was the estimated time for power to go back on. Everyone was hungry so we got into the car and decided to find a little place to get a bite to eat. Driving through New Canaan, I spotted a big black dog in the middle of the road. He had obviously escaped from his house because he was wearing an invisible fencing collar. Sometimes a dog will not mind the 'shock' to escape or run after a squirrel, etc. but won't risk it to get back in. Personally, I do not like invisible fence but it is better than no fence, I suppose. He was obviously friendly, trying to get the men in their passing trucks to stop and visit with him. I know it was lunch hour, but I couldn't believe that not one of those men stopped to try and help this dog. We all know better than to approach a strange dog but believe me, this dog was wagging his tail and very sweet. Since I always have a leash or crate in my car, I stopped traffic with my car so no one could get by before I had him by the collar. I was a bit worried because you never know if he was injured or would bite because he was nervous. He was fine. A very big black Labrador Retriever. Not a young dog, he had some grey whiskers on his chin and the eyes of an old soul. He wore a tag. His name was Bear. I called his phone number and left a message on the machine. His address was on the tag so I put Bear into the 'way back' of my car and drove to his house. Did I mention it was raining, he was soaked to the skin and I had a new bag of chicken feed and a stack of new fluffy white towels back there? Lets just say, neither one fared well after Bear got comfortable back there. Finally, a woman stopped and asked if I was broken down. She said she knew someone who knew the people who lived in Bear's house and called her from her cell phone. The woman had the same number as was on Bear's tag. Then she had the brilliant idea (the kind of idea that only a mother could come up with!) to call the school where she knew their child attended as they would probably have an emergency cell phone number. Ta da! Within 1/2 hour of the call, a very grateful man came home to take Bear inside. Hopefully he won't notice the red bits of Twizzlers (the only treats left in my car from Halloween) in Bear's teeth. By the size of Bear, I have a feeling the Twizzlers weren't the first snack he has ever had. By the time I got back, it was too dark inside to do anything really. When it rains here, it is very dark in my house so finishing my paintings was out. Went to Starbucks and just as we got home, the power went on. My email box was full...sorry if you tried to send me a note. Anyway, the power is on, the house is warm, Bear is where Bear should be, all is right again. For now 'anyways'....... CS ^..^
Posted by Cathy Santarsiero, "The Christmas Corgi" at 6:35 PM

Oh no, I hope tomorrow is a better day! And, I have to ask...are you in New Canaan, CT? My mom used to teach at the New Canaan Country School. Small world!

Sorry you had a bad day but I'm glad you were there when the dog needed you to be. Sometimes things for us go wrong when it's right for someone else.

What a great story! Bear is a lucky boy to have run into you that day. And somehow I don't think the owner will be mad even if he does notice the Twizzler stuck in his teeth :)

Aww, I'm so glad you found Bear! What a cute story, and I'm glad you're back in a warm house :)

Aw, poor bear! I'm glad you were there to help out!

We love the picture!

Bear is very lucky you found him!

Glad it worked out and he got home okay.

Good for you... you're exactly the kind of person I would want to find my Mabel if she were lost.

Hi!!!
You are such a good soul! Bear is a lucky dog that you took the time to find his home. Bet he really felt in heaven when he found the Twizzlers!
I agree with you, Oct. just flew by. I can't believe it came and went and now it's almost TGiving. Slow down time!!!!
I want to put my photo on your sidebar, but I don't know how and I haven't had time to figure it out. I actually think that silhouette looks better than my own mug! :)
It's so cold here in KC, MO. We are supposed to get a little snowflake--nothing big. I hope not, as I as certainly not ready for that---I have stuff yet to do in the yard.
Have a good rest of the day! Dana