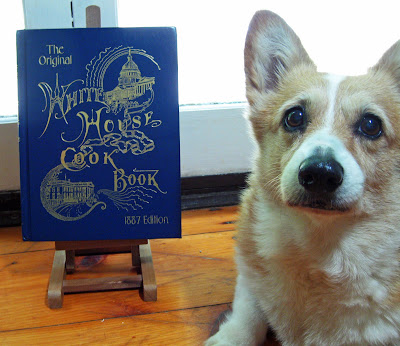 I love cookbooks. I especially enjoy reading old cookbooks. My friend Steph stopped in the other night and brought me a fun book for my birthday. It is "The Original White House Cookbook 1887 Edition" Inside it says Cooking, Toilet and Household Recipes, Menus, Dinner-Giving, Table Etiquette, Care of the Sick, Health Suggestions, Facts Worth Knowing, etc. etc. A Comprehensive Cyclopedia of Information For The Home by Mrs. F.L. Gillette and Hugo Ziemann, Steward of the White House.

I'm having great fun with this book. Some of the recipes are a real doozy. Some of the recipes are so intense and things I would never eat in a million years. But some look very interesting, if you can translate them to today's cooking ingredients and measurements. My Mom was here a couple of days ago and as soon as I showed her the book she found this simple recipe for Puff-Ball Doughnuts and decided that we would make them. We didn't know what they meant by 'sweet milk' (we thought of all the sweet milks like condensed, etc) but then my daughter googled it and found that in the 19th century it simply meant whole milk. Perhaps there are other types of sweet milk that were intended but this is what we used for our doughnuts.
Here is the entire recipe.
It is actually written as a paragraph as most of the recipes in the book are:

Puff-Ball Doughnuts
"These doughnuts, eaten fresh and warm, are a delicious breakfast dish, and are quickly made. Three eggs, one cupful of sugar, a pint of sweet milk, salt, nutmeg, and flour enough to permit the spoon to stand upright in the mixture: add two heaping teaspoonfuls of baking-powder to the flour; beat all until very light. Drop by the dessertspoonful into boiling lard. These will not absorb a bit of fat, and are not at all rich, and consequently are the least injurious of this kind of cakes."

So rather than use lard we used canola oil to fry them up. I didn't have any fresh nutmegs on hand so we used a pinch of cinnamon and a capful of pure vanilla. We used a pinch of salt also, since the recipe didn't specify. We decided that the next time we make them, we will drop them a bit smaller into the oil as they do puff up as they say. I think the size of a Dunkin Munchkin would be perfect with these. You want the oil to be very hot, that is why they do not absorb the oil. We thought that next time we might use a bit of cream with the milk and add more cinnamon or do the nutmeg instead. Rolling them in the sugars was a good idea. The only thing, we did not agree that they are not at all 'rich.' These are not light donuts. Your kids will want a tall cold glass of milk with these for sure.

So here is my Mom whipping up the puff balls. I made her wear one of Natalie's Tasha Tudor aprons while she was making these.
It just seemed like the required couture of the moment. 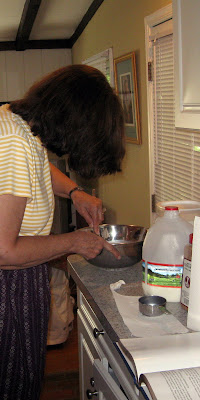 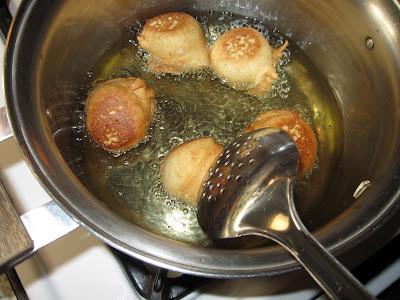 When they came out of the oil, we put them quickly on paper towel lined plates for a second or two and then rolled them immediately in either powdered sugar, granulated sugar or a combo of cinnamon and sugar.

Then my brother Gary and niece Hayley stopped by for a bit.
They were visiting for the week. My lovely Sister-In-Law Katy was shopping for a dress for a wedding. They live Los Angeles so I miss them.
A lot. 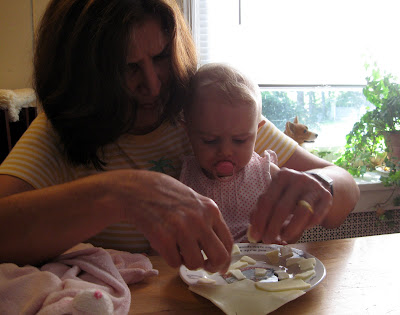 Here's our mom (Grandma Annie to our kids) giving Hayley some cheese.
Isn't she just the cutest princess ever? 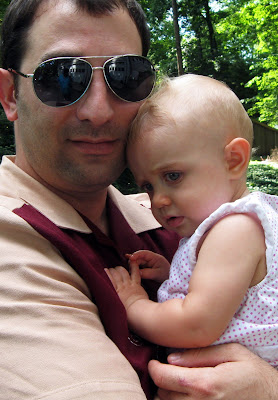 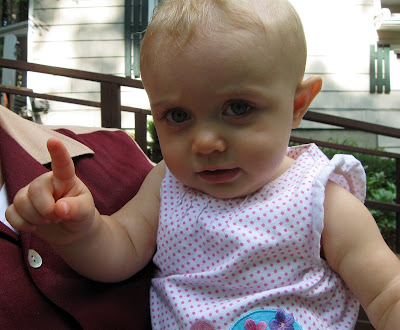 She thinks he is number one.

Hey! your mom has the same head of thick hair as you!
Genetics!
Super post, that book will be a real gas...literally!
Hee hee, your doughnuts looked delish.

That's such fun cookbook. I used to collect pre-1600 cookbooks and they are a real delight to decipher. I think that's half the fun of making the recipe!

Yum! I can use some of those doughnuts right now (breastfeeding makes you sooo hungry...). And Hayley's so darn cute! Can't wait till Eva's that age :)

That's a great picture! That fabric was one of my absolute favorites for the aprons, and I spy a picture of Tasha on the wall! :)

Now I know where you get your hair!
I have that cookbook in my car as we "speak". Mine is white!
Here I thought you were cooking puff ball mushrooms! :-)

Hayley is a real doll.

That cookbook seems quite an interesting read.

How were the donuts? Good?

That recipe is so similar to one my mom used to make for us when I was a kiddo!! Yummy Yum Yum.....I'm certain, however, she DID use lard to fry them in!! Dana

PS Sweet photos of your mom, brother and niece!

Such beautiful kids! So glad you had a fun visit with them.

I probably shouldn't try to make those... They look scrumptious and I'd probably eat a bunch! Don't think they'd be on the diet. :(