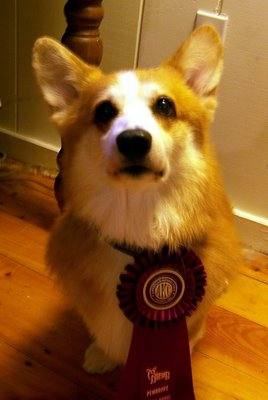 We attended our Corgi Club's (Mayflower) Fall Match yesterday in Connecticut. The skies opened at the crack of dawn and poured buckets of rain on human and Corgyn alike. Thank goodness for the huge gazebo that provided shelter for us all. In spite of being soaked to the skin and muddy Corgis, we all had a nice day. An added bonus to the puppy match was the 'Best Fluffy' contest and the Parade of Champions, Veterans and Titleholders. I entered my best friend, Indy, into the Champion Veterans. He hasn't been shown in years, but it is amazing how putting on his little show collar transformed him back into a little show dog...muddy paws and all. Of course, once the collar came off, he immediately had both paws on the picnic table and tried to steal someone's dessert. He wanted me to take this picture of him wearing his commemorative rosette. He is handsome, is he not? ^..^ CS
Posted by Cathy Santarsiero, "The Christmas Corgi" at 10:57 AM